South of the Birdshead Peninsula is Bomberai Peninsula with two mountainous areas, Onin or Fakfak Peninsula and the Kumafa Mountains. Of the latter hardly anything is known, but Fakfak is rather frequently visited by explorers. The former name of the city of Fakfak is Kapaur, which can be found on some ancient maps, but many times used by biologists. The Fakfak Mountains are of moderate altitude, the highest peak being 1619 meter. 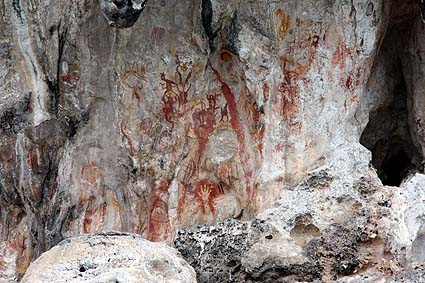 (left) Rock paintings near Fakfak (photo: Dmitry Telnov); (right) base of map by onearth.jpl.nasa.gov (modified with geographic names by Papua-Insects)

for an empty map with clear view click here

A recent entomological expedition was made by Henk van Mastrigt who will give later biological information of the area.