The Wandammen Peninsula is a relatively small area on the west side of the Cenderawasih Bay, dominated by a north-south running high mountain ridge, the Wondiwoi or Wandammen Mountains, with altitudes up to 2252 meters. The east side of this mountain ridge has very steep mountain slopes, at the west side the mountains are of a lower altitude with more shallow slopes. At this side most of the few villages are settled. Almost all of the mountain slopes are forested, but at the west side a small and narrow area is cultivated, with Wasior, Miei, Rasiei and Tandia as the only villages with some importance. Because there is still no road connection with the mainland of the Birdshead Peninsula there are no cars, only some motorcycles and mopeds, the main traffic is done by foot and by "vlerkprauw", a narrow boat with floaters on both sides. In Wasior and Miei many remains of the Dutch colonial time are still present; houses, schools and monuments of murdered missionaries. Because of its isolation the virgin nature is overwhelming. However, Wasior can be reached by boats coming from Manokwari and Ransiki which carry goods and petrol for the local people. Merpati used to have an aerial connection with Wasior from Manokwari, but since 1996 it is discontinued.

The mountainous area southwest of Wandammen, between the Bomberai Peninsula and Wandammen Peninsula, is almost unexplored. The mountains are of moderate altitude, the highest peak is 1605 meter. A little more is known of the frequently visited bays at the south coast, like Triton Bay and Etna Bay. We hope to get some detailed information of the interior of this area soon. If you have information or photographs which can be used by us we would be very thankful.

Although Wandammen Peninsula is an official National Park there is a serious threat of logging and hunting. The insect fauna proved to be rather unique by its endemic characters and therefore needs to be protected.

Base of map by onearth.jpl.nasa.gov (modified with geographic names by Papua-Insects)

for an empty map with clear view click here

In the North Wandammen Peninsula is accompanied by Roon Island, which almost entirely consists of steep rocks and forests. At the coast some small villages are settled, mostly on poals, like War and Yende. In Yende we found a monument of the Dutch protestant missionary G.L. Bink, who died on 3th of May 1899 by decapitation by the wild local people.

The fauna and flora of Roon is similar to that of the northern part of Wandammen Peninsula with some endemic characters, while the southern part (from Dotir and Rakwa) is clearly closely related to the Birdshead Peninsula.

Northwest of Wandammen, at the southeast coast of the Birdshead Peninsula, Wendesi is settled. It is a small fisherman's village, but in former days it was important for the area, especially for the Dutch protestant mission. Again we found a monument of a deceased missionary: Jan A. van Balen, who set foot on Wendesi at the 10th of August 1888. According to the size and place of the monument it must have been a very important missionary in his period. 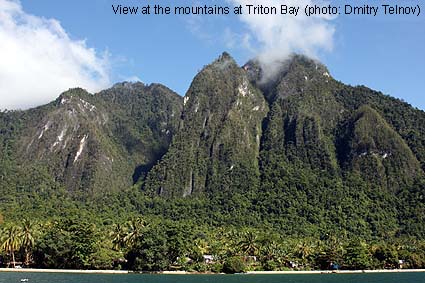 More northward, almost halfway between Ransiki and Wandammen, is the island of Mioswaar. The insect fauna of this rather small island was hardly known until Henk van Mastrigt and some of his students paid a visit to it and made a small inventory of the island in 2009. The island still has its beautiful undisturbed nature as seen on the picture below. The first insects records of this island can be found in the insect pages of this website!