Recently released relevant books and essential standard identification guides are listed below. Publications in magazines will not be mentioned here, because they are too numerous. These you will find in the literature lists dealing with the species.

It started as a newsletter from the Workgroup Insects of Papua and since 2008 it is has an ISSN status (see below). With contributions on surveys by biology students and teachers of the University of Cenderawasih, Papua Indonesia. The language is in Bahasa Indonesia only. For translated abstracts of the text click here.

This newsletter is from July 2008 continued as an entomological magazine: 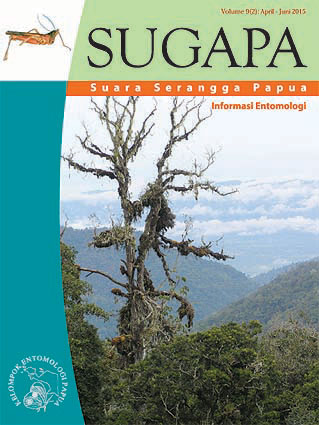 Suara Serangga Papua (SUGAPA), Voice of Papua Insects, is a non-profit journal published in two parts annually by Kelompok Entomologi Papua (KEP) and is devoted to the entomology of Papua, the western part of New Guinea, including its surrounding islands. Articles are accepted from amateur and professional entomologists and must be in English (to which an Indonesian translation of the English abstract will be added) or (maximum of 25 % of the journal) in Indonesian, with comprehensive English abstract. Although the editors will consult renowned specialists of relevant insect groups, the authors are fully responsible for the content of their publications.

SUGAPA is sponsored by the Van Tienhoven Foundation in The Netherlands and by Bank Rakyat Indonesia (BRI). For more information about this foundation click on the logo at the right.

With a group of inspired and ambitious students and teachers from UNCEN Henk van Mastrigt founded in June 2006 “Kelompok Entomologi Papua” (Entomological Society of Papua) and from July 2006 Henk van Mastrigt published interesting entomological facts and fieldwork results from the students and himself in a newsletter: “Suara Serangga Papua” (SUGAPA), which means “the sound of the insects of Papua”. Two years later SUGAPA became an official entomological magazine, with a new colourful lay out, including publications in English by scientists from all over the world. Many species new to science have been described in SUGAPA, as well as faunistic notes and other interesting entomological facts have been published in SUGAPA.

Since Henk van Mastrigt deceased in August 2015 the continuation of the magazine suddenly came to an end, the last issue being 9(2). One year later the Papua Insects Foundation continued the release of the magazine, with approval of the family Van Mastrigt and the members of Kelompok Entomologi Papua. The magazine is continued online with free access to the website www.sugapa.org.

17 peer-reviewed scientific papers on various aspects of biodiversity, biogeography and nature conservation of the ‘hottest’ biodiversity hotspot of the globe contributed by 20 professionals from 12 countries. 450 pages plus over 90 colour plates in A4 format with hard cover and over 100 new taxa descriptions
ISBN: 978-9984-9768-4-6

31 authors from 16 countries present 24 original papers on biogeography, diversity, history or biological exploration and faunistics of the Indo-Australian transition zone. Among them publications on amphibians, bryophyttes, beetles, butterflies etc. The first chapter is devoted to Alfred R. Wallace, the legendary person and the first even true zoologist visited the nowaday's eastern Indonesia. Volume 2 of the series is published on 584 pages, including 126 colour plates. Over 60 new taxa are described in this volume.
ISBN: 978-9984-9768-7-7

37 authors present 29 original papers on biogeography, diversity, sytematics, history or biological exploration and faunistics of the Indo-Australian transition zone. The publications are on botany, vertebrate zoology, invertebrate zoology, ecology and biogeography with the majority on entomology. Volume 3 of the series is published on 658 pages, including 172 colour plates. Many new taxa are described in this volume.
ISBN: 978-9984-9768-8-4.

A very comprehensive work on the ecology of Papua in a most wide perspective. A lot of detailed information on various subjects which directly or indirectly are related to the invironment and ecology of New Guinea in general and Papua in particular. Part one deals with subjects like the history of New Guinea, geology, geography, climate, biogeography (with some examples), palaeontology, flora and fauna. Part two deals with natural ecosystems, the interaction between humans and the ecosystems, and finally but not least, nature conservation.

With this book in hand the reader can identify all genera and most species of damselflies occurring in New Guinea. The guide contains nearly 300 colour drawings and over 250 line drawings by Albert Orr and twenty-two colour photographs taken in the field by Stephen Richards. Many genera and most species included have never been depicted in colour before.

The Field Guide can be ordered by transferring € 20.50 (outside Netherlands) to the bank account listed below. Clearly state your address and 'Field guide New Guinea dragonflies 2015'.

The Butterflies of Papua New Guinea. Their systematics and biology

A very comprehensive work on all butterflies of Papua New Guinea with attention to the species of Papua Indonesia and surrounding areas. Very complete, but unfortunately without distribution maps. Distribution patterns for Papua species have to be taken out of the text and are in many cases not mentioned or incomplete. Nevertheless it is the best work that ever appeared on this subject.

The Moths of Borneo

A magnifiscent series of books on the faunistics and systematics of moths of Borneo, with much information on species and genera of adjacent areas, including many from New Guinea. Many new species described. Essential to recognize family groups, genera and species. Every volume includes many colour plates with moths and black-and-white plates with genitalia.

A field guide to the Smaller Moths of South-East Asia

A very practical handbook for identifying families and species groups of microlepidoptera of Southeast Asia, with many references to New Guinea. A selection is made of the most common, beautiful or striking species from this region. Therefore it is possible to identify many species from the plates or at least find the family or genus where they belong to. A must for every microlepidopterist studying the Indo-Australian region.

The families of Malesian moths and butterflies

A magnifiscent book with all the Lepidoptera families of the world mentioned and described. This is the most actualized complete Lepidoptera family list of the world at the moment.
Apart from illustrations of examples of larvae and genitalia, there is a key to the families. The large reference list is very useful for further study of the families.

Many references to New Guinea families, very practical for the study of Lepidoptera in general.

A comprehensive book about the butterflies (Rhopalocera) of the area around Jayapura, including the eastern part of Mamberamo and the Cyclop Mountains (Papua Indonesia, New Guinea). The pictures are of high quality. It is, however, very unfortunate that the book contains no English text at all, but is nevertheless very usefull for identifying by the pictures and the scientific names. For detailed faunistic and biologic information one should translate the Bahasa Indonesia.

About the only book on Lepidoptera of Papua Indonesia. 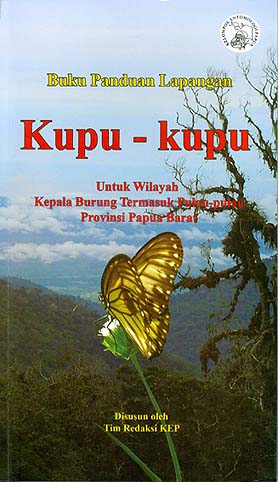 A comprehensive book about the butterflies (Rhopalocera) of the Birdshead Peninsula (Vogelkop), including the Onin and Bomberai Peninsula. Like in the first guide mentioned above the pictures are of high quality. Although the text is fully Bahasa Indonesia it should not be a limit to identify the species and to understand the information with the species. It is the second field guide in this series on the Lepidoptera of Papua Indonesia.

For more information about this field guide or to order please send a message to the Kelompok Entomologi Papua. You may write in English.

On Monday December 16th, 2013 a new field guide on butterflies will be launched by Henk van Mastrigt and Evie L. Warikar.
The book is in Bahasa Indonesia and consists of nearly 200 pages, including 84 colour plates with 1171 colour pictures.

This field guide can be ordered at:
entopapua@gmail.com

This field guide is sponsored by Bank Rakyat Indonesia (BRI)

Mimika Butterflies, guide to the Butterflies of the Mimika Region of Papua

A beautiful book, printed on glossy, thick paper (the weight of book is 650 gr.) with high quality pictures, a pleasure for everybody who likes to study or observe butterflies in the Mimika Region. The book was first published by PT Freeport Indonesia Biodiversity Centre in Timika in 2001, this revised second edition has recently been published by PT Freeport Indonesia Environmental Department in Kuala Kencana, Timika, printed on slightly different and lighter paper (weight 550 gr.).

Illustrated and annotated catalogue of the genus Milionia and allied genera (Geometridae, Ennominae)

An overview of the Milionia species with descriptions of new related genera, species and subspecies. The colourful plates of the habitus and the b & w genital plates are very practical to identify the species.

Many species occur in Papua.

The Psocoptera of tropical South-east Asia

A comprehensive work on all Psocoptera of tropical Southeast Asia, including those from New Guinea. With identification keys on the higher taxonomic levels to genera and a long checklist of all species with their distribution. The long and probably rather complete reference list is also very useful for further information.