History of expeditions in Papua Indonesia

When speaking of "Papua", the western part of the island is meant in all political periods (Dutch New Guinea, West Irian, Irian Jaya and Papua Indonesia).

A great number of expeditions have been made in the interior of Papua, but not all were biological surveys. We restrict ourselves here in listing only the biological expeditions, during which presumably or certainly Lepidoptera and other insects were collected in Papua and to major events for Papua.

The first inhabitants of New Guinea, black skinned and frizzy haired, first arrived from the west perhaps 60,000 years ago. While the sea level was considerably lower at the time of man's first migrations to Australia and New Guinea, there were still stretches of ocean to cross. Rising seas eventually cut off Australia from New Guinea and led to the divergent gene pools which now show up in the somewhat different physical types. Small groups settled along the seashores and short distances inland, living from hunting, fishing and gathering. There must have been but slight contact between these groups on what was to merge as the island of New Guinea. In recent studies, linguists were amazed to learn that on this island, with only 0.01 % of the earth's population, 15 % of the world's languages are spoken. Out of an almost incredible 800 languages (not dialects), about 550 are found in Papua New Guinea and some 250 in Irian Jaya (Papua).

By 4000 B.C., agriculture was well developed, leading to some population concentration and stable social structure. Then the next waves of immigration began washing up on the shores of Papua. The newcomers, who originated from South China and dispersed from Taiwan, slowly spread over a time span of two millennia to populate the Philippines, Indonesia, Malaysia, Micronesia and Polynesia. In most areas, this new breed, called Austronesian, replaced existing populations thanks to their more advanced technology in tools, weapons and agricultural skills. But in New Guinea, the majority of the long-established Papuans successfully resisted assimilation by the Austronesians who established themselves only on some nearby islands and coastal strips.

The next great step in Papua's history was the "sweet potato revolution". Plant geneticists still have not established an accurate date for the introduction of the sweet potato to New Guinea, but the impact of this new tuber revolutionised the population distribution and resulted in large increases. The sweet potato, unlike taro and other previously planted crops, grows well above the 1,500 meter line of altitude. This crucial fact placed its cultivation beyond the normal range of the malarial mosquito which had - up to then - kept down the number of humans. The intensive agricultural technique of planting the sweet potato resulted in great yields which also helped to increase the population in the highlands of New Guinea.

Because traveling to and in New Guinea is no longer exclusive for the very fortunate and rich explorers anymore, since cruises and airlines are frequently visiting the larger cities, it has become impossible to keep up a complete list of modern expeditions and visits from entomologists. Tourists and collectors will have taken the opportunity to collect butterflies and other insects for their collections. However, modern scientific inventories are not much undertaken yet in Papua.

From the late 1970's the missionary Henk van Mastrigt has been (and still is) active with collecting in the area. His enormous collection is in Jayapura and comprises all families of Lepidoptera with species from mostly the northeastern part of Papua (Mamberamo, Jayapura, Baliem Valley, Star Mountains, etc.). His specialization in the genus Delias (Pieridae) has lead to many scientific publications with many new (sub)species. Through his enthusiastic and experienced guidance it was possible to held five recent expeditions with scientists from The Netherlands.

In 1993 an expedition was undertaken for 8 weeks to the Baliem Valley, the Birdshead Peninsula, Wandammen Peninsula, Roon and Biak (R. de Vos, A.J. de Boer and A.L.M. Rutten).

In 1996 it was followed by an expedition for 9 weeks to the Birdshead Peninsula, Batanta and Wandammen Peninsula (R. de Vos, A.J. de Boer, P.J. Zumkehr, G. Withaar and H. de Jong).

Since 2000 students of the Cenderawasih University have been involved in a series of entomological surveys, cooperating with Conservation International Indonesia and/or Henk van Mastrigt, as follows:
· Around Yongsu at the Cyclops Mountains (2000)
· The Mamberamo area around Dabra (2000)
· The isles of District Pantai Timur: Wakde, Yamna, Masih-masih, Podena, Yarson and Anus (2001).
· The Kumamba islands, north of Sarmi (2002).
· The Moor and Mambor islands, norths of Nabire (2003).
· The south side of the island Supiori (2004).
· Mamberamo area in the environment of Marina Vallen (2004)
· The environment of Fak-Fak (2004)
· The island Numfor (2005)

In 2005 an expedition was held together with students and teachers of the University of Cenderawasih (UNCEN) in Waena (near Jayapura) for 7 weeks to the Star Mountains and Walmak (District Nipsan) in the Jayawijaya Mountains (R. de Vos, G. Withaar, P.J. Zumkehr, J.H.H. Zwier, T. Lackner and D. Mannering). During these expeditions many insects have been collected and are now stored in the Zoological Museum of Amsterdam (ZMAN) and awaits scientific research (some of it is already in research).

In October 2008 two surveys were held by members of the Papua Insects Foundation (R. de Vos, P.J. Zumkehr, V. Kalkman, J. de Vos and J. Schaffers) and students of UNCEN at the north coast of Supiori Island and again in Walmak. Two members visited also Lelambo, a small mountain village at an altitude of 900 meters, somewhat north of Walmak. The insect material which has been collected is stored in the Zoological Museum of Amsterdam (ZMAN). During this survey many macro-photographs of insects were made by J. Schaffers which will be used for this website.

In November 2014 Piet Zumkehr, Siep and Janny Sinnema and Frans Groenen visited Fakfak (Onin Peninsula) and Mokwam (Arfak Mts.). In October 2015 Rob de Vos, Daawia Suhartawan and Erlani Rahareng had the same plan but this was frustrated by many forest fires which resulted in closing most of the airfields in the South. Instead they visited Kaimana and the primary forest of the Buruway District, near the Kumawa Mountains. 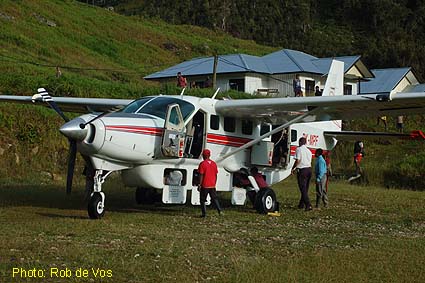 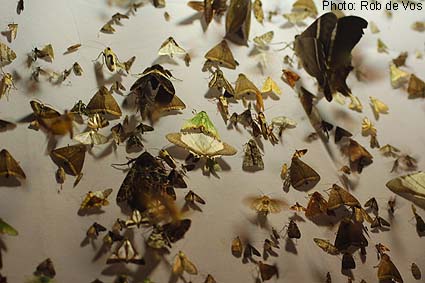 In November-December 2005 the Foja Mountains Expedition was held by LIPI and Conservation International. It was undertaken for four weeks and its results were amazing. Lots of new animals an plants were discovered in an area where probably almost no people have been before. About 25 specialists joined this expedition (supervised by Bruce Beehler), among which our contributor Henk van Mastrigt and Evie L. Warikar (UNCEN), who collected all kind of insects, of which many appeared to be new to science.

At the end of October till November 2008 another Foja Mountain Expedition by the same organisors was held and again our contributor and butterfly specialist Henk van Mastrigt was participating. There was again a lot of rain this time but Henk managed to collect more butterflies than before and also the moths were quite abundant. Results of this expedition will follow later in this website.

In March 2009 a survey was held on Misool Island by the Entomological Society of Latvia (Lettland) with D.Telnov, M.Kalnins, K.Greke and Z.Pipkaleja. They studied insects and non-marine Mollusca. In 2010 members of the same society visited the Birdshead Peninsula (West Papua) in "the neck" (Kaimana, Triton bay, Bitsyari bay, Triton lakes) and Onin Peninsula (Fakfak Mountains). In autumn of 2015, Dmitry Telnov visited Ayamaru / Aitinyo area on Doberai peninsula, the Arfak Mountains and the Anggi lakes, as well as Merauke & Transfly region.